Katalin Karikó, Uğur Şahin and Özlem Türeci have been awarded the Paul Ehrlich and Ludwig Darmstaedter Prize for the development of the ’wonder weapon’ messenger RNA therapy and the first vaccine against coronavirus. At the award ceremony on 14 March 2022, the research professor from the University of Szeged (SZTE) was praised by Nobel laureate Sir John E. Walker, followed by a performance of Brahms' Hungarian Dance No. 5 in her honour. The ’Crystal Ball’ appeared next day during the presentation of the four female scientists.

’Never before in the history of this prestigious scientific prize have so many people been honoured: seven researchers were awarded the Paul Ehrlich and Ludwig Darmstaedter Prize at the same time,’ the Frankfurter Rundschau reported. Five women and two men were presented with the prize as last year's event was cancelled due to the COVID-19 pandemic. The special ceremony was thus transformed into an international scientific ’Crystal Ball’.

Germany's most renowned medical award was shared by the three leaders of the Mainz-based company BioNTech: the founding couple Uğur Şahin and Özlem Türeci, and Katalin Karikó, who joined them in 2013. The Paul Ehrlich and Ludwig Darmstaedter Prize 2022 recognises the discoveries that enabled the development of the messenger RNA (mRNA) research and the first two vaccines against Covid-19, the researchers’ perseverance and the appropriate and determined research response to the emergence of the SARS-CoV-2 virus. 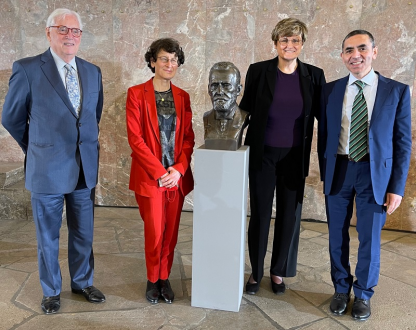 (The previous awards of the Kariko - Türeci – Şahin researcher trio, who developed the ’wonder weapon’ of the mRNA therapy, were listed on the SZTE News Portal on 21 September 2021 in the Hungarian article Az mRNS-terápia „csodafegyverét” fejlesztő Karikó – Türeci – Şahin kutatói hármas díjai)

How do bacteria talk to each other? The two American microbiologists who answered this question - Bonnie L. Bassler of Princeton University and Michael R. Silverman, co-founder of the Agouron Institute in La Jolla - were awarded the 2021 Paul Ehrlich and Ludwig Darmstaedter Prize (only Bonnie L. Bassler was present at the ceremony).

The 2021 Paul Ehrlich and Ludwig Darmstaedter Prize for Young Researchers was awarded to Elvira Mass of the University of Bonn for her discovery that the body's development is controlled early on by specialized immune cells. This year's prize went to Laura Hinze from the Hannover University Medical School for discovering how to overcome the resistance of leukaemia cells.

A showcase of discoveries

The Association of Friends and Benefactors of Goethe University manages the Paul Ehrlich Foundation and organises the award ceremonies. This year's programme included 3 welcome addresses, 4 laudatory speeches and 4 research programme presentations. This is why the Paul Ehrlich and Ludwig Darmstaedter Awards Ceremony on 14 March 2022 has become a showcase of research ideas and working methods.

The two-and-a-half-hour programme can be viewed here.

’Humans can acquire new weapons to fight infectious diseases,’ said Thomas Boehm, Chairman of the Board of Trustees of the Paul Ehrlich Foundation, when reviewing what connects the two years' prizewinners.

Katalin Kariko's role was also highlighted in news summaries. The Frankfurter Allgemeine for example reported that ’Despite strong opposition, the Hungarian Karikó pursued the idea of using messenger RNA as a template for the production of immune-stimulating proteins’.

Katalin Karikó was ’not deterred by the lack of funding’. The researcher, who became a biochemist at the University of Szeged, was ’from the very beginning of her scientific career convinced of the potentials of mRNA’ says the article ’The talented courier from the centre of the cell’ on the Paul Ehrlich Foundation's website.

Appreciation from a Nobel Prize laureate

’At the end of the 20th century and in the early years of this century, the first of our three Laureates, Katalin Karikó, a Hungarian biochemist working at the University of Pennsylvania in Philadelphia, took the initial significant steps towards solving this conundrum of how to introduce mRNA effectively into living cells. She discovered that by replacing specific ribonucleotides in mRNA with similar, but chemically modified versions, she could stabilise the mRNA, and at the same time weaken the body's defence response to the mRNA, thereby significantly increasing intracellular protein production.’ said Sir John E. Walker, explaining the essence of the SZTE alumna's innovative idea and persistent work. The Nobel Prize laureate Walker is well aware of Katalin Karikó's achievements. He met and talked with the Hungarian biochemist in Cambridge in November 2021. Based on this, he pointed out that Katalin Karikó's initial research breakthrough was built upon by Uğur Şahin and Özlem Türeci, a German medical couple of Turkish origin, with the encouragement of Professor Christopher Huber.

Sir John E. Walker has personal experience of the excellence of life sciences education at the SZTE, as he visited Szeged in 2012, when he paid tribute to Albert Szent-Györgyi together with eight other Nobel Prize-winning researchers (of whom the Cambridge researcher who solved the ATP enzyme characterisation problem is the most closely linked to the work of the Nobel Prize-winning rector of the SZTE), For more details, see our Hungarian article on John E Walker of 3 April 2012.

’The novel mRNA vaccines stemming from the work of Katalin Karikó, and developed by Özlem Türeci and Uğur Şahin, usher in a new and exciting era in vaccinology’ the Nobel Prize-winning Cambridge scientist stressed. The method, he said, ’can be used for both cancer and infectious diseases, and by providing missing or repaired proteins, it offers the possibility of treating other diseases’.

The €120,000 prize, which comes with the prestigious German award, could give a further boost to the development of mRNA-based medical technology.

Katalin Karikó received her latest award at an exceptional ceremony and a special venue. The alumna, honorary doctor and research professor of the University of Szeged, senior vice president of BioNTech and adjunct associate professor at the University of Pennsylvania was welcomed with special attention at the Paul Ehrlich and Ludwig Darmstaedter Prize ceremony.

Katalin Karikó, the record-breaking scientist with more than seventy awards, arrived at the Paulskirche in Frankfurt as the grand prize winner of the Szegedért Alapítvány (Foundation for Szeged). The location of the ceremony in Germany is linked to the European Revolutions of 1848-1849, as the first freely elected German National Assembly met in the Lutheran church named after St Paul. The site, which is one of the most important symbols of German democracy, has been called the ’House of All Germans’ since the 100th anniversary of the revolution. The event, which was held on the occasion of Paul Ehrlich's 168th birthday, started and ended with a musical performance. The two cellists, Annabel Hauk and Anna-Olivia Amaya-Farias, also paid tribute to the Hungarian biochemist Katalin Karikó by ending the ceremony, which was held on the eve of the outbreak of the Hungarian Revolution and War of Independence of 1848-1849, with Johannes Brahms' Hungarian Dance Nr. 5.

The day after the ceremony, on 15 March 2022, four female scientists - Bonnie L. Bassler, Elvira Mass, Katalin Karikó and Laura Hinze - claimed the ’Crystal Ball’ and gave a lecture on the journey from basic research to applied medicine.