The history of the University 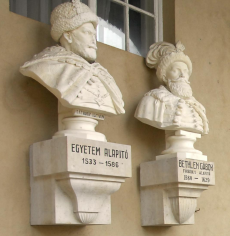 The University of Szeged traces its origins back to 1581 with the foundation of the Academia in Cluj (Kolozsvár). István Báthory, Prince of Transylvania, King of Poland (1571-1586), Grand Duke of Lithuania took measures to establish a Catholic university consisting of two faculties, Arts and Theology.

Magyar Királyi Ferenc József Tudományegyetem (Royal Hungarian Franz Joseph University) is established in Cluj and operates there until 1921 when it is relocated to Szeged.

The first academic year of the University is ceremoniously opened in Szeged by Rector Gáspár Menyhárt, and the construction of the university buildings starts a few years later.

University buildings around Dóm Square, in front of the Votive Church, are ready to open, and the first pond of the botanical garden is created.

In the midst of WW2 and just after the second Treaty of Vienna, the Franz Joseph University is relocated to Cluj (Kolozsvár), and a new institution called Miklós Horthy University is established in its place in Szeged. Albert Szent-Györgyi is appointed Rector of the University.

The University is renamed after the city, its new name is University of Szeged.

The Medical Faculty is separated from the University of Szeged and begins to function as an independent university.

The University of Szeged adopts the name of the poet Attila József.

The Medical University of Szeged adopts the name of Albert Szent-Györgyi, its Nobel laureate rector.

The Szeged Conservatory begins to function as one of the current 12 Faculties of the University of Szeged.

The new building of the Study and Information Centre (Tanulmányi és Információs Központ – TIK) a large part of which is occupied by the unified University Library, is inaugurated. A year later, the Centre is named after the poet Attila József.