Katalin Karikó, Professor at the University of Szeged and her Fellow American Researcher Receive the Japan Prize

Katalin Karikó, Research Professor at the University of Szeged (SZTE) and Drew Weissman, Professor at the University of Pennsylvania, have been awarded the 2022 Japan International Prize for their pioneering research contributing to the development of mRNA vaccines. The award ceremony for outstanding technological achievements will be held in Tokyo in April this year in the presence of the Japanese Imperial couple. Awarded researchers of Japan's most prestigious scientific honour will receive a diploma and a medal.

The Japan Prize is awarded annually to scientists and engineers from around the world who have made significant contributions to the advancement of science and technology, thereby furthering the cause of peace and prosperity of mankind. Prof. Katalin Karikó (Hungary/USA) and Prof. Drew Weissman (USA) are co-winners of the Japan Prize in the fields of Materials and Production – as announced by the Japan Prize Foundation. The winners of this year's prize, which has been awarded annually since 1985, were selected from 208 nominees. 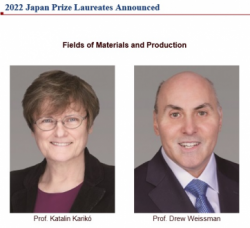 Katalin Karikó is presented by the Japan Prize Foundation website as "Senior Vice President, BioNTech SE, Adjunct Professor, Perelman School of Medicine, University of Pennsylvania and Professor, University of Szeged". In her biography, they also state that she holds a degree in Biology and a PhD in Biochemistry from the University of Szeged. Highlights of her main publications include those co-authored with his former Japanese research colleague Hiromi Muramatsu. Among her awards, the 2021 Keio Medical Science Prize is mentioned.

"Kariko and Weissman have discovered that by replacing uridine with a modified form of uridine in the mRNA, they can suppress the unwanted innate immune response in the body. Their continuous research into mRNA protein production has laid the foundation for the development of mRNA vaccines," summarized the Japan Prize Foundation. The website’s press release discusses the role of mRNA in protein synthesis; answers the questions "How the Covid-19 vaccine works?" and "Where the development of mRNA-based drugs is at?"; and talks about the future of mRNA and related technological research.

At the press conference on 25 January 2022, which was broadcast live and can be viewed afterwards, SZTE research professor Katalin Karikó called it a great honour to receive the Japan Prize. She emphasized that this Prize also recognizes hundreds of other scientists, doctors and technical experts who contributed to their achievements. Summing up her career, she said that „my journey from the humble beginning demonstrates that it doesn’t matter how far you start, you can achieve so much if you put your mind into it and don’t give up.” She expressed her hope that her winning this Prize would inspire women scientists to take on leadership positions. Addressing the younger generation, she said that the most important thing is to enjoy what they do, adding that scientific work can be very enjoyable.

The Japan Prize comes with a certificate of merit and a prize medal. The East Asian island nation's prestigious scientific award will be presented in Tokyo by the Imperial Couple and the Prime Minister of Japan in April 2022.