The first " IVI – SK bioscience Park MahnHoon Award" will be awarded to Dr. Katalin Karikó, Research Professor at the University of Szeged (SZTE), Dr. Drew Weissman, Professor at UPenn, and Dr. Tore Godal, CEPI Advisor, as it was announced in Seoul on March 24. The US$85,000 award, established last year in the Republic of Korea, recognizes individuals who have made extraordinary contributions to the development of vaccines and their delivery to children in low-income countries.

"Three vaccine pioneers" are recognized by the first ever "IVI - SK Bioscience Park MahnHoon Award". The award ceremony will take place on 25 April 2022.

Among the vaccine developers, Dr. Katalin Karikó, Research Professor at the University of Szeged, and Dr. Drew Weissman, Professor at the University of Pennsylvania (UPenn), have contributed to the development of key technology that led to the world's first mRNA vaccine against Covid-19," said the Director General of the Vaccine Institute (IVI), explaining the decision of the award committee. Dr. Jerome Kim added that the next-generation vaccine has saved millions of lives worldwide.

Among the scientific achievements of Dr. Katalin Karikó and Dr. Drew Weissman, the laudation highlights their discovery of a new way to modify mRNA and their development of a delivery technique to package mRNA into fat droplets, more specifically into so-called lipid nanoparticles. These laboratory breakthroughs allow mRNA to reach the right part of the body and trigger the body's immune system to fight disease. This innovation has made mRNA safe, effective, practical to use, and has served as basis for two vaccines against the SARS-CoV-2 virus. All this has helped to fight the virus and contain the Covid-19 pandemic. Among the awards that the two researchers have jointly won, the 2022 Benjamin Breakthrough Prize in Life Sciences and the 2022 Japan Prize are included in the "IVI - SK Bioscience Park MahnHoon Award" justification published on 24 March 2022 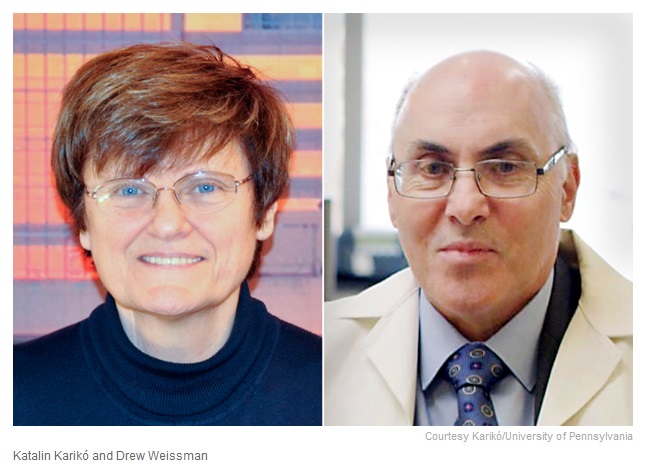 The "IVI - SK Bioscience Park MahnHoon Award", established last year, recognizes individuals who have contributed to the advancement of global health and the discovery, development and delivery of vaccines. The award was established by the International Vaccine Institute (IVI), a non-profit, intergovernmental organization based in the Republic of Korea, and SK Bioscience, which defines itself as "a global innovative partner in vaccines and biotechnology". The establishment of the International Vaccine Institute (IVI) was proposed by the United Nations Development Programme (UNDP). SK Bioscience will contribute US$ 85,000 to the "Park MahnHoon Award", named after its late Vice President, Dr. Park MahnHoon.

The third recipient of the Prize, Dr Tore Godal - founder and currently advisor of the Coalition for Epidemic Preparedness Innovation (CEPI) - accelerated the delivery of Covid-19 vaccines to low-income countries, thus has played an important role in global health.

What links the world-renowned Hungarian biochemist and his US research colleague to the Norwegian public health advisor is the rapid development of vaccines against Covid-19 as well as the Prince Mahidol Prize which they all received – at different times.