At the culmination of a 5-day event on 20 January 2022, the VinFuture Grand Prize with 3 million US dollars was awarded to Katalin Karikó, Professor at the University of Szeged, Drew Weissman, Professor at UPenn and Pieter Rutter Cullis, Professor at UBC. Karikó, research professor from the University of Szeged and her fellow scientists who laid the foundations of mRNA technology with their discoveries, participated in a symposium and educational programs related to the award ceremony.

Katalin Karikó was the first to receive the VinFuture Grand Prize. Besides her, the newly established prize - which comes with a prize money of 3 million US dollars - was awarded to Drew Weissman, Research Professor at the University of Pennsylvania and Pieter Rutter Cullis, Professor at the University of British Columbia. The VinFuture Prize Inaugural Award Ceremony was held on the evening of 20 January 2022 at the Opera House in Hanoi, capital of Vietnam, and was broadcast on Vietnamese TV and several major TV networks, including CNN. 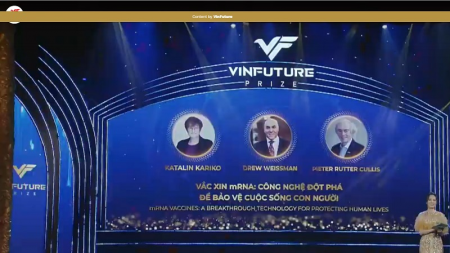 Nearly 600 nominations from more than 60 countries on 6 continents have been submitted for Vietnam's first science and technology awards. Most of the nominees came from Asia (34%), North America (32%) and Europe (21%), the VinFuture Foundation announced on its website.

In the Vietnamese news introducing the research professor of the University of Szeged, Katalin Karikó, her previous awards were highlighted, including the "Princess of Asturias Award", the "Vilcek Prize" for excellence in biotechnology, the "Breakthrough Prize" for achievements in life sciences, and the "Lewis S. Rosenstiel Award" for outstanding work in basic medical research. At the ceremony, Katalin Karikó, who was the first to thank Vietnam for the award, also said that she had heard a lot about the Southeast Asian country as a student, having attended the biology programme at Szeged University with two Vietnamese students. The two former students from Szeged - Huong and Yen - met and took pictures with their world-famous classmate "Karikó Kati" before the award ceremony in Hanoi. The short speech recalling personal memories was well received by the audience celebrating the scientists. Viewers of the televised ceremony also saw Karikó’s toast recorded on a smartphone by her daughter, two-time Olympian Zsuzsanna Francia, who accompanied Katalin Karikó to Vietnam.

The VinFuture Prize special gala event featured a video film that highlighted the achievements of Katalin Karikó (presented as a Hungarian scientist), and her American and Canadian research colleagues in the field of messenger RNA and her relationship with mRNA-based vaccines developed to control the Covid-19 pandemic.

Millions for the pioneers

The Karikó - Weissman research team was able to modify mRNA and encapsulate it in lipid nanoparticles, preventing the immune system from reacting to foreign mRNA entering the body and avoiding cytokine induction, toxicity, and off-target effects - vietnamnews.vn summarized in an article. Based on Karikó and Weissman's discovery, and Cullis's development of lipid nanoparticles, pharmaceutical companies like Pfizer-BioNTech and Moderna were able to produce effective COVID-19 vaccines in record time.

The VinFuture Prize rewards breakthrough scientific research and technological innovations with humanitarian outcomes. This Grand Prize is also one of the largest science and technology prizes in the world, with a value of US$ 3 million. 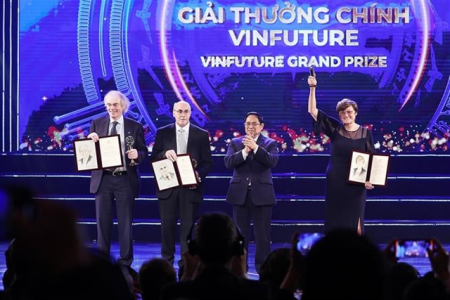 "In the history of human development, scientists have changed the world," said Prime Minister Phạm Minh Chinh at the VinFuture Grand Prize ceremony, where he presented the prize to the three professors.

In addition to the Grand Prize, three Special Prizes, each valued at US$500,000, have been dedicated specifically for female innovators and to recognize innovations in emerging fields and in developing countries. The VinFuture Awards encourage research that supports the UN Sustainable Development Goals.

The VinFuture Prize is a global science and technology prize established by Pham Nhat Vuong, Chairman of Vingroup, and his wife PhamThu Huong to recognise ground-breaking scientific discoveries and technological inventions.

"The global gathering of scientific quintessence" is the aim of a series of events from 18 to 21 January 2022, bringing together the world's most influential scientists.

On the first day of the complex series of events linked to the first VinFuture Award Ceremony in Vietnam, the VinFuture Prize Board members and the scientists involved in the selection of nominees held a conference. The conference was attended by, among others, Professor Sir Richard Henry Friend (University of Cambridge) and Nobel Prize winner Professor Gerard Mourou (Ecole Polytechnique), who has a working relationship with the University of Szeged.

The 3 main themes of the Science for Life symposium are energy, artificial intelligence and the future of global health. Guest speakers on the latter theme included researchers "playing a leading role in humanity's global fight against Covid-19". Katalin Karikó, Professor at the University of Szeged, Adjunct Professor at the University of Pennsylvania, who pioneered the development of mRNA technology, and fellow researcher Drew Weissman (UPenn); and Pieter Rutter Cullis (The University of British Columbia), known for his achievements in the field of lipid nanoparticles, also joined the panel. The "Science for Life" symposium also featured health experts and epidemiologists working to combat HIV and other infectious diseases.

The series of events will conclude with a "Science Dialogue" on 21 January 2022, featuring the VinFuture award winners.