Katalin Karikó and Drew Weissman will jointly receive the 2022 Jessie Stevenson Kovalenko Medal. The U.S. National Academy of Sciences (NAS) thus acknowledges that the revolutionary development of the two scientists has made the delivery of mRNA efficient for vaccines and immunotherapies. Kariko and Weissman will receive the Kovalenko Medal on 1 May 2022.

In recognition of her "pioneering work in the development of nucleoside-modified mRNA", Katalin Karikó will receive the 2022 Jessie Stevenson Kovalenko Medal. The US National Academy of Sciences is honoring the first two scientists who pioneered the development of the licensed Covid-19 vaccine, Katalin Karikó, who holds a PhD in Biochemistry from the University of Szeged, and Drew Weissman, who has become a research fellow at the University of Pennsylvania (UPenn) laboratories.

According to a press release published by the National Academy of Sciences (NAS) on 24 January 2022, Katalin Karikó and Drew Weissman showed that "the modified mRNA was non-inflammatory and functional in vivo in animals". This paved the way for the new mRNA technology to be used for therapeutic treatments. Through their research, they have demonstrated in animal studies that nucleoside-modified mRNA can be used for vaccination against a number of pathogens, including influenza virus, HIV, SARS-CoV-2 and malaria." The method can also be used "in infection prevention, treatment of various acute and chronic diseases and genetic engineering.” - Summarised NAS, summing up the two scientists' results and findings. 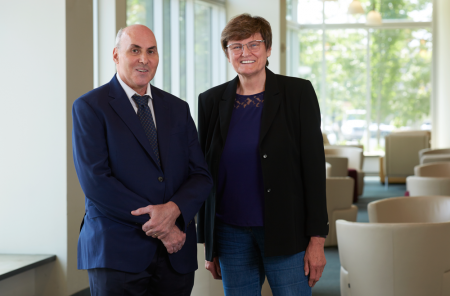 As a recipient of the Jessie Stevenson Kovalenko Medal, Katalin Karikó will receive a gold-plated bronze medal and share a $ 25,000 prize with UPenn's fellow researcher Drew Weissmann, and the two scientists will receive a $ 50,000 grant to continue working together.

The NAS Kovalenko Medal will be awarded on May 1, 2022, at the Academy's annual meeting, where Katalin Karikó, Research Professor at the SZTE, and Drew Weissman, Professor at UPenn, will receive the award.

Among the 16 NAS awards, the Jessie Stevenson Kovalenko Medal, which is awarded every two years, is also distinguished by the fact that Katalin Karikó is the first Hungarian among the scientists who have won the award so far.

Previous winners include Nobel Laureate James P. Allison, one of America's top scientists, who is linked to Katalin Karikó by several awards.