SZTE Among the Best Institutions on THE Impact Ranking 2021

The University of Szeged was listed among 1115 higher education institutions in the latest Times Higher Education ranking. This year, the University of Szeged has again performed excellently in the areas covered. In THE's recent list, SZTE was ranked in all 17 areas measured, which is a truly outstanding achievement. This was achieved despite the fact that the number of participating institutions on both the accumulative and the territorial lists has increased by one and a half to two times compared to the previous year.

In the overall ranking, SZTE is the second best institution in Hungary: it is ranked 301-400th in the world in 2021. This means that SZTE can continue to be among the world's leading universities.

The University of Szeged achieved the best result on the list of actions to Zero Hunger (SDG2). Out of the 442 institutions ranked, SZTE is 57th, and can stand on the top step of the podium as the best university in Hungary. The university on the banks of the Tisza improved its ranking from last year, despite the fact that the number of the examined institutions almost doubled. In addition to reducing poverty and food wastage, the most important aspects of the list were the development of efficient food production and processing methods and the transfer of knowledge (beyond university education to local farmers and producers).

SZTE could be at the top of the podium in Hungary on Clean Water and Sanitation list (SDG 6). Out of the 520 institutions ranked, SZTE was ranked between 101 and 200, maintaining its position from last year. The list was compiled taking into account the university's water use, wastewater management practices, emerging water-saving solutions, and educational activities promoting responsible water use. 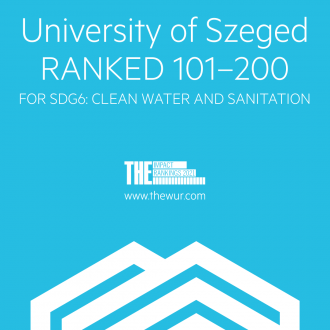 In the list of Responsible Consumption and Production (SDG 12), the university maintains its position from last year both globally and among domestic institutions: it ranks 101-200th among all institutions. The list, which includes 503 institutions in 2021 compared to 360 last year, is based on factors such as efforts to reduce the use of plastics and single-use products, activities related to hazardous substances, the amount of waste and the amount of waste recycled and sent to landfill. 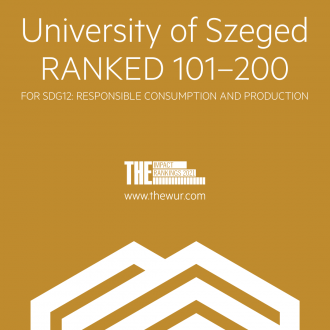 SZTE also preserved its 101-200th place, and moved up to the top step of the podium in Hungary in Climate Action list (SDG 13). The 566 ranked institutions were measured on indicators such as climate change-related education and research activities, cooperation with local and regional organisations, energy use, low-carbon energy use, and the pursuit of carbon and carbon-free emissions (decarbonisation). 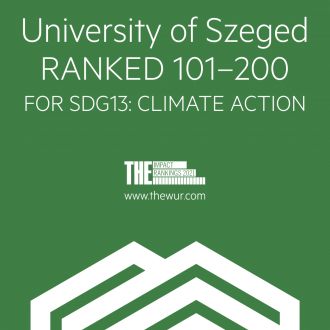 The University of Szeged performed excellently in the list of efforts to protect aquatic communities, Life Below Water (SDG14), ranking 59th out of 379 institutions, and once again the best Hungarian university in Hungary. The most important criteria for the ranking were scientific, educational and awareness-raising activities related to the protection of aquatic communities, as well as the active conservation and restoration of surrounding habitats.

Out of 402 institutions, the University of Szeged ranked 84th in the area of Life on Land (SDG 15). Once again, the University of Szeged was ranked first among Hungarian higher education institutions. The ranking was based, among other things, on courses, programmes, third mission activities and events that aim to protect terrestrial communities and conserve biodiversity (e.g. internationally collaborative species rescue and habitat restoration projects).

The list of institutions for Peace, Justice and Strong Institutions (SDG 16) has grown by 200 institutions this year to 653. Among them, the SZTE has maintained its position from last year: in 2021, the institution is still ranked 101-200, and is the best Hungarian institution in this field in Hungary. The list was compiled taking into account, among other things, the number of students enrolled in law, penitentiary and law enforcement courses and training, as well as the number of experts involved in public decision-making. In addition, the social utility of different legal skills, such as the existence of legal aid services, was also examined.

There are many ways in which institutions can contribute to the Sustainable Development Goals, and the ranking takes into account their impact on the environment. The "added social value" of the institution is an important factor, which can help a university with a smaller budget to achieve good results. In addition to teaching, each objective can be supported by related research results, good practices and improvements in the functioning of the institution, and any other activity that adds value to the wider university community, from disseminating knowledge to providing expertise to government.

The outstanding results achieved in the rankings also demonstrate the University of Szeged's commitment to achieving the goals set by the United Nations, be it in the areas of education, research and service activities to enhance the well-being and prosperity of the social environment, dissemination of knowledge, preservation of human, social, cultural and environmental values, social, economic and environmental responsibility, or the promotion of sustainable development.

The full ranking is available here.