Six researchers from the University of Szeged have published in the prestigious scientific journal Nature Energy.

The team leader Csaba Janáky, Associate Professor at the Department of Physical Chemistry and Materials Science of the Institute of Chemistry of the University of Szeged, was awarded the civilian branch of the Knight's Cross of the Order of Merit of Hungarian Republic in 2021. We asked the researcher about the history and impact of the two awards.

SZTE: Rising carbon dioxide emissions are a global environmental problem. The research group led by Csaba Janáky has already contributed to the capture of carbon dioxide and its conversion into useful energy carriers. Now, the reviewers of Nature Energy, the most prestigious journal of energy science, have considered the latest results of the Szeged research group to be so powerful for the profession that the editors have included them in the April 19, 2021 issue of the 46.5 impact factor journal.

CS.J.: This publication is the latest stage in our work on the electrochemical conversion of carbon dioxide and perhaps our greatest achievement to date. The immediate precursor is our work on record high currents, but it is all the more fundamental because we have reached findings that affect the wider research community. We show in this paper what makes an electrolyser work well or not. How can such equipment be ensured to operate stably over the long term?

SZTE: Researchers at the University of Szeged "and their industrial partners have developed a proprietary, energy-efficient electrolyzer technology using only water and carbon dioxide, which is the first in the world to break the 1 ampere per square centimetre current density barrier for carbon monoxide production", - we announced in late September 2020. In their previous communications, they have shown how and why a carbon dioxide electrolyzer works in continuous flow mode. In Nature Energy, they answer more general questions that concern the peer-reviewed journal. What other questions have they addressed?

CS. J.: There are basically two types of electrolysis cells. Each of these has two electrodes - an anode and a cathode. But in one type of cell, the electrolyte solution flows freely between the two electrodes, whereas in the other type, a membrane separates the anode space from the cathode space. Traditionally, electrochemistry started in the middle of the last century, and became an industrial technology, without a membrane separating the two electrodes. But in recent decades, new technologies - whether for hydrogen production or fuel cells - have been linked to electrolysis cells using membrane separation. Both types of cells appear in the thousands of publications on carbon dioxide conversion. However, over the past 3-4 years, the research community, consisting of hundreds of research groups, has found that higher performance parameters could be achieved with membrane-free cells. The fundamental reason for this has not yet been explained.

SZTE: Why is the lack of explanation a problem?

CS.J: Because the membrane type offers better possibilities for increasing the size of the electrolytic cell. However, the fundamental chemical reason for the difference in performance between the two different types of cells is not understood. We considered this as the starting point for our investigation. We were also motivated by the fact that in the last year or two it has been described and observed by many people that if we operate such electrolysers for a long time, their performance decreases very quickly and the measurable current decreases. This is because solid precipitation forms in the cell.

SZTE: What is the solution?

CS.J.: We realised that the two problems are not independent.

CS.J.: Because we have understood a problem that concerns researchers and industry alike. We also explained the root causes and offered a solution.

SZTE: Can you please explain the steps from observation to solution?

CS. J.: In an electrolysis cell containing a membrane, an alkaline solution is circulated on the anode side. Anions can move across the membrane from one side to the other. So far, no one has assumed that the cation in the solution on the anode side - for example, sodium hydroxide, potassium hydroxide - plays any role, because in principle cations do not move across the membrane. But what we found was that all cations always pass through the membrane. One consequence of this is the formation of solids, i.e. precipitate. At the same time, the cations that do pass through also help the cell to function, so another consequence of this phenomenon is that the performance of the electrolysis device increases.

SZTE: Was it "just" their job to balance the pros and cons?

CS.J.: One option is to try to control and optimise the processes. We had another idea: rotate water on the anode side, not lye. In this case, the precipitation was eliminated, but the power was reduced. Then our work continued by looking for an answer to the question of how to introduce as many cations as needed. To do this, we developed a process to inject a cation-containing solution onto the cathode part itself during operation. We patented the method in summer 2020 and sent a manuscript describing it to Nature Energy. 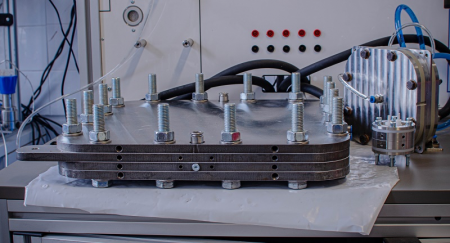 SZTE: Once the basic research is completed, is the plan ready for application and practical use?

CS.J.: The practical benefits of this research are extremely wide-ranging. The immediate benefit is our methodology to operate electrolysers in the longer term. This is the missing link in our research group's series of publications describing efficiency and energy efficiency. Our result is a landmark for the whole research community, as we have contributed to the understanding of the stable operation of carbon dioxide electrolysis cells.

SZTE: The design of the cell is now patent protected and the publication in Nature Energy has been preceded by a new international patent application. Now they give us the key to how to make the multilayer electrolysis cell stable?

CS.J.: Yes. What's more, we offer a scalable solution. We will show that it is also possible to scale up the invented method of operation. 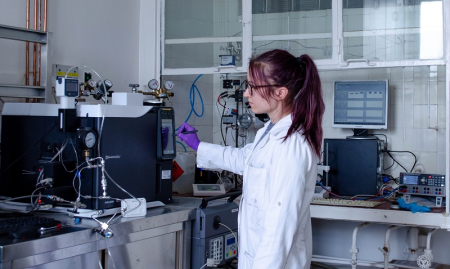 SZTE: Another interesting feature of their article is that all six authors are researchers affiliated with the University of Szeged. What is the significance of this?

CS.J.: I believe in collaboration, both with foreign and industrial partners. However, this article proves that, thanks to the developments of recent years, it is possible to develop a discovery in every detail, from idea to realisation, with the help of SZTE staff, in the laboratories here, in other words we can build on the knowledge base of the University of Szeged.

SZTE: How can the impact of articles published in Nature Energy be described?

CS.J.: This is difficult to predict, because the impact factor is basically measuring the journal and not the publication. Over the past six months, all six of us have invested considerable effort in checking the various measurements requested by the reviewers of this article, in the meticulous development of the background to this article. As a result, I believe that we have produced a high-profile publication, which I hope will be received as enthusiastically as we have by the scientific community.

SZTE: What will be the next step?

CS.J.: We want to adapt the operation of electrolysis equipment to industrial applications and real life parameters. We will investigate the scientific, chemical background to this, how industrial operating conditions affect the system under investigation. Nevertheless, we will try to extend the method presented in this communication to other types of electrolysis cells.

SZTE: This article and the accompanying origin story justify the laudation. "In recognition of his internationally outstanding achievements in the field of research aimed at solving global environmental problems, as well as his teaching and research development activities, Csaba Janáky, chemist, associate professor at the Department of Physical Chemistry and Materials Science, Institute of Chemistry, Faculty of Science and Informatics, University of Szeged, was awarded the Knight Cross of the Order of Merit of the Hungarian Republic in civilian category". The award was announced on 15th of March, 2021. What does it mean to you?

CS. J.: Of course I was delighted to receive this recognition. However, I would also like to stress here that, although the recognition is individual, the achievement behind it belongs to a team. In the past, we have typically received recognition from the scientific and professional community, but this one is much more widely known. We have also been congratulated by people who do not necessarily follow our activities. Therefore this public recognition has brought even more attention to our achievements.