Katalin Karikó Received the Most Prestigious US Award for Inventors

The 205 years old US award, the John Scott Award is the latest honour for Katalin Karikó and fellow researcher Drew Weissman. The special inventors' prize was presented to her husband on 18 November 2021 in Philadelphia, Pennsylvania.

Katalin Karikó, a researcher with a PhD in biochemistry from the University of Szeged, who pioneered the use of mRNA technology in medicine, is the latest recipient of the John Scott Award, a prize established 205 years ago to recognise inventors and discoverers.

The 2021 John Scott Prize was awarded to Katalin Karikó for creating "a stable and safe mRNA construct" that "enables gene-induced immune responses in the human body". She was awarded the Philadelphia prize together with Drew Weissman, who became a research fellow at the University of Pennsylvania in Philadelphia. According to the citation, the American doctor "has made a significant contribution to the development of mRNA". This made possible "the gene-induced immune response in the human body". The two scientists' research, first published in 2005, enabled the development of mRNA-based COVID-19 vaccines at record speed.

The invitation to the John Scott Award ceremony for Katalin Karikó can be read here. elolvasható.

The achievements of the Kariko - Weissman research team in the Philadelphia academic community are highlighted in the justification for the Philadelphia award. Established in 1816, the John Scott Award has been presented to inventors and explorers by the Franklin Institute and the Philadelphia City Council since 1919. Nominations are made by a committee of individuals from Philadelphia.

The award was established by John Scott, a chemist who lived in Edinburgh in the 19th century. The Scottish founder called on the Philadelphia Society, which was charged with administering the heritage of the American Benjamin Franklin, whom he revered, to give a prize of not more than $20 and a copper medal inscribed with a suitable inscription to "men and women of ingenuity who have made useful inventions".

FROM THE DOOR LOCK THROUGH THE "TIMER" TO THE NOBEL PRIZE

The prize, named after founder John Scott, was first awarded in 1822. It was used to recognise inventors of useful tools such as door locks, seeders and razor blades. Many innovators in the fields of industry, agriculture and science have been honoured with this award. 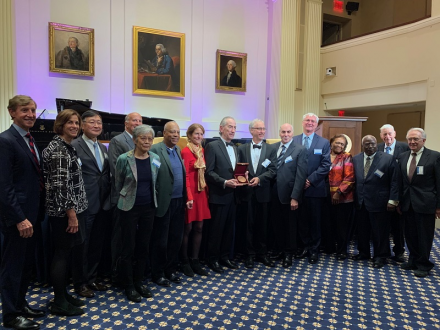 The long list of names includes the world's most prolific inventor, the American Thomas Edison; or Nikola Tesla, born as an Austrian-Hungarian, who is recognised for his "system for the generation, transmission, distribution and utilisation of multi-phase electricity".

Among the John Scott Award winners, Nobel laureates are Sir Alexander Fleming (1944), who discovered penicillin, and his fellow researcher Howard Florey (1965); and John Bardeen (1954), the inventor of the transistor, the only man to be known for having won the Nobel Prize twice in Physics. But one of the inventors of the laser, Nobel laureate H. Charles Townes (1963), also received the Scottish-American award.

Among the women who have been awarded the prestigious copper medal, we can also mention the Polish physicist and chemist Marie Curie, a two-time Nobel Prize winner in radioactivity research, or the American chemist Jennifer Doudna, the 2020 Nobel Prize winner who wrote a laudatory essay on Katalin Kariko for the 2021 Time 100 list of the most influential people. 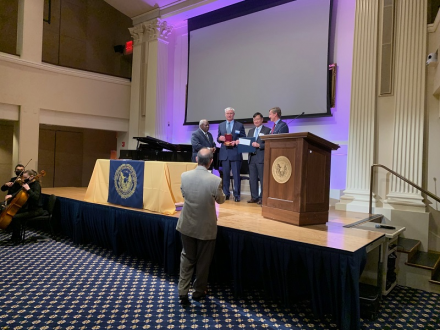 The John Scott Awards ceremony also welcomed the 2020 winners. Among them was Jean Bennett, who received the award for "the development of gene therapies to treat retinal degeneration and ophthalmic diseases".

Jean Bennett and Katalin Karikó worked together in a laboratory at the University of Pennsylvania. The Hungarian researcher referred to the results of their joint work in several speeches.

The Karikó - Weissman research team's joint result on the "messenger" type of RNA was awarded for the first time in 2021, since its first publication in 2005.

The Kariko - Weissman research team have already won more than a dozen awards in 2021. With these awards, the world thanks them for their discoveries in mRNA technology, which have led to the development of vaccines to control the COVID-19 epidemic.