Katalin Karikó received the Reichstein Medal, known as the most prestigious Swiss award in the field of pharmaceutical sciences, on 6 September 2021. The biochemist who patented the therapeutic application of mRNA containing modified nucleosides, vice-president of BioNTech, Honorary Doctor and alumni of the University of Szeged, has thus "entered the spacious hallway of the Nobel Prize".
Tweet

The Reichstein Medal is awarded by the "Swiss Academy of Pharmaceutical Sciences" (SAPhS) to internationally renowned scientists who have made a major contribution to the development of medical science and pharmaceutical sciences through research, education and practical application.

"Katalin Karikó's contribution to mRNA research and its application in vaccines and medicine has been fundamental." – Quoted by the newspapers in June 2021 from the official statement of the Swiss Academy of Pharmaceutical Sciences. "Your determination to develop new technology not only brought a new era in vaccine technology, but also contributed to rapid and mass vaccination that prevented the spread of COVID-19 disease."

Katalin Karikó received the gold Reichstein Medal at a ceremony at the "Haus der Universität" of the University of Bern on 6 September 2021. “Listening to Katalin Kariko's journey and story has been so inspiring! Her passion for science and her resilience are mind-blowing. An absolutely deserved Rechstein Award from the Swiss Academy of Pharmaceutical Sciences to a woman who never stopped to believe in her science.” - Said Paola Luciani, Professor at the University of Bern, in a LinkedIn post. 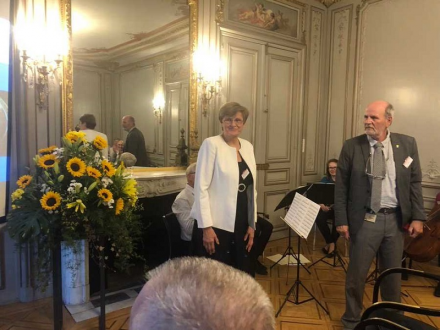 The SAPhS named the medal after the Swiss chemist and Nobel Prize winner Tadeus Reichstein who developed the synthesis of ascorbic acid (vitamin C) in 1932 and thus enabling its industrial production. Vitamin C is a link between the two laureates. It is interesting to recall that Albert Szent-Györgyi, professor at the University of Szeged, won the Nobel Prize for his discoveries in the field of biological combustion processes, for his work on the role of vitamin C and fumaric acid in catalysis.

The Reichstein Medal is awarded irregularly every 5-10 years, most recently in 2014. The Medal has already been awarded to two Nobel Prize winners.

The Rosenstiel and Horwitz Prizes, previously awarded to Katalin Karikó and Drew Weissman, are said to be, that the person so recognised "has entered the spacious hallway of the Nobel Prize".