Katalin Karikó, alumna of the University of Szeged, donated her precious belongings related to her years in Szeged and to the university to the Klebelsberg Library of the University of Szeged (SZTE). Her Girl Scout whistle, her university degree and grade book, her biology notebooks and diplomas were among the wide range of relics that she gave to her alma mater's library. SZTE is honouring the world-famous researcher with a virtual exhibition.

The librarians welcomed the world-famous researcher, who donated her personal belongings to the university during her visit to Szeged, with a standing ovation. Colleagues of the Klebelsberg Library of the University of Szeged and the University Archives honoured the world-famous achievements in scientific research of her former student Katalin Karikó with a virtual exhibition.

"We have created an ever-expanding collection with the extensive cooperation of numerous members of the library and the archives," said Katalin Keveházi, Director-General of the Klebelsbelsberg Library of the University of Szeged, introducing the virtual exhibition to Katalin Karikó. The aim of the collection is to present the now world-famous scientist in a dignified and authentic way.

The virtual exhibition is divided into 11 thematic units, and it is available at the Klebelsberg Library's Gallery and Media Library’s page at this link.

The first five thematic units present the beginning of Katalin Karikó's career, her years at her alma mater in Szeged, the first period of her years of scientific research and also her previous research in the USA that led her to achieve success in the fight against COVID-19.

The following six chapters include video clips of interviews and discussions with Katalin Karikó, Hungarian and international press releases and the bibliography of her work.

The exhibition organizers highlighted the leading role of the University of Szeged and the Biological Research Centre of Szeged in microbiological and genetic research in the 1970s and 1980s. SZTE is proud to remember Katalin Karikó and her former professors. Katalin Karikó's mRNA-related research was triggered by a combination of all these, which brought her to the centre of scientific life during the pandemic. Thanks to Katalin Karikó’s decades of mRNA research and patents the world was finally able to get the first clinically licensed vaccine against COVID-19. 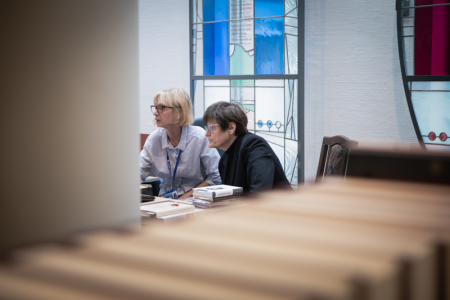 The special feature of this virtual exhibition is that Katalin Karikó's personal and academic documents can be seen by the general public.