The FIEALC XIX conference is organized by the International Organization of Latin American and Caribbean Studies (FIEALC) and the Department of Hispanic Studies of the University of Szeged, called "Latin America and the World: Collaboration and Meeting Space" between 24-28 June in Szeged. Nearly 400 participants from 33 countries attended the event for scientific deliberation.

FIEALC’s main objective is to promote scientific and interdisciplinary dialogue between the world's Latin American people, organizes a conference every two years since 1983. This year the University of Szeged won the right to organise the five-day congress.

‘The organization which was founded over 40 years ago by Latin American researchers in Mexico, aims to bring together Latin American and Caribbean professionals and facilitate the exchange of researchers. This collaboration is also an opportunity for countries around the world to learn about Latin America's culture, economy, history, and understand the social processes in the region’, said Ruben Ruiz Guerra, director of FIEALC.

It is a tradition that researchers and professors, politicians and university leaders attend the conference, as it is an excellent opportunity to establish new cooperation between countries, universities and research institutes.

Besides the city of Szeged and the University of Szeged, countries such as Spain, Portugal, Brazil, Ecuador, Mexico, Colombia, Peru, Chile, Argentina; and institutions such as the Cuban Embassies, the Hungarian Rectors' Conference, Tempus Public Foundation, the Foreign and Commonwealth Office in Szeged, the Latin-American Department of the Ministry of Foreign Affairs and EU-LAC Foundation for Cooperation between Europe and Latin America were represented at the five day event. 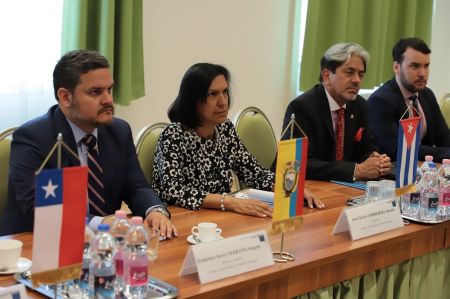 Prof. Dr. Slobodan Pajovic, President of FIEALC, emphasized that FIEALC's success lies in flexibility and tolerance. He added that their relationship with the Department of Hispanic Studies at the University of Szeged had been fruitful for years as they had already cooperated in organizing the 2017 Belgrade conference. The biennial conferences, in addition to the scientific meeting, allow different countries to deepen their relations with Latin American countries.

The Department of Hispanic Studies at the University of Szeged, Faculty of Humanities and Social Sciences - formerly known as the Latin American History Research Group - was one of the first to join the organization through Professor Anderle Ádám. Scientific research on the history of Latin America and the Caribbean has a tradition of almost half a century. In 2017 the Department won the right to organize Conference XIX in Szeged, thus to be the President of FIEALC for next 2 years.

‘Latin-Americans Congress of this size has not yet been held in Hungary’, underlined András Lénárt, professor at the Department of Hispanics at the Faculty of Arts and Social Sciences of the SZTE. The new president of FIEALC emphasized that many of the participants from all over the world are now meeting for the first time with the Hungarian scientific community and the University of Szeged.

‘In the next two years, the international network of FIEALCs would like to further expand to include new institutions and researchers. The University of Szeged also benefits from the Presidency, as it can expand its network of international contacts not only in the field of humanities, but also in legal, economic and environmental studies’, he concluded.

The congress was opened on Wednesday, 24th June in the City Hall. Professional programs started on June 25 with section meetings and plenary presentations.

The closing day of the event Leopoldo Zea Prize will be awarded, with recognition the jury will reward the work of the best young researchers and doctoral students in the field of philological studies and social studies.