A celebratory Session of the Senate was held on the 9th of November 2019 to mark the Day of the University at the SZTE. In addition to Senator Honoris Causa and Doctor Honoris Causa titles, Pro Universitate, Kunó Klebelsberg and Pro Laudanda Promotione Awards and other recognition awards were given.

The celebratory event was honoured with the presence of prominent public figures, such as Dr. Györgyi Lengyel, ministerial commissioner, Vice-Rectors, Deans, Vice-Deans, Directors, the Rector of Gábor Dénes College, family members of the awardees and professors of the University of Szeged attended the award ceremony.

‘The University of Szeged can preserve its prominent role in the domestic and international world only by developing educational, research and patient care activities in the institution, building on its centuries-old traditions, experience of its predecessors and its school-building activities, while following the new opportunities and challenges of our time’ emphasized Prof. Dr. László Rovó. The rector of the University of Szeged also added that besides the developments, excellent researchers and professors whose international success and scientific achievements acknowledges the University of Szeged and spreads its reputation world-wide should not be forgotten. Also it helps expanding the institution's international relations system and help the career development of young researchers.

During the celebratory Session of the Senate, Doctor Honoris Causa was awarded to Egil Sigmund Bakka, an internationally renowned dance researcher, dance anthropologist, dance teacher, emeritus professor at the Norwegian University of Science and Technology (NTNU) in Trondheim, head of the Dance Department of the University's Faculty of Music, and director of the Norwegian Center for Traditional Music and Dance.

Prof. Dr. Zoltán Gyenge, Dean of the Faculty of Humanities and Social Sciences emphasized that Professor Bakka has been working tirelessly in dance research for 50 years, focusing on the traditional dance cultures of Norway and Northern Europe.

It is also important to shed the lights on the fact that Professor Bakka was the initiator and coordinator of the Choreomundus program, for an MA in dance anthropology along with four European universities.

You can find more information about the Choreomundus program here.

Doctor Honoris Causa was awarded to Professor Heinrich Friedrich Uwe Hellmann, President of the Senate of the University of Potsdam, former Dean of the Faculty of Law, University of Potsdam. Prof. Dr. Zsolt Szomora, Vice Dean for Educational Affairs of the Faculty of Law of the University of Szeged, praised his work: ‘Professor Hellmann gives lectures and seminars on German criminal law, corporate and tax law as well as European and international criminal law. He is the author of numerous articles and books and writes explanations for law books in the best-known commentaries.’

In recognition of his close cooperation with the Faculty of Science and Informatics of the University of Szeged, the Doctor Honoris Causa was awarded to Professor Prashant Kamat, professor of University of Notre Dame and Ralph McKenzie, professor of mathematics at Vanderbilt University.

Dr. László Mucsi, Dean of the Faculty of Science and Informatics at the University of Szeged, emphasized that the professor works closely with the MTA-SZTE "Momentum" Photoelectrochemical Research Team led by Csaba Janáky.

You can find more information about the MTA-SZTE "Momentum" here.

‘We can state that Professor McKenzie is the greatest living figure of logic and universal algebra’ said Dr. László Mucsi, Dean of the Faculty of Science and Informatics.

During the celebratory Session of the Senate, Doctor Honoris Causa was awarded to Frank Wuytack, professor at the Catholic University of Leuven, Belgium.

During the celebratory Session of the Senate, Senator Honoris Causa was awarded to Ferenc Darvas, founder and chairman of ThalesNano Zrt. and Dr. Smolanka Volodymyr Ivanovych, rector of the Uzhhorod National University.

Ferenc Darvas is the founder of the largest privately owned Hungarian high-tech research and development network. Business activities include drug research / development, flow chemistry and nanotechnology’ said Dr. László Mucsi, Dean of the Faculty of Science and Informatics at the University of Szeged. He also emphasized that ThalesNano Zrt. has cooperated and continues to cooperate with a number of researchers at the University of Szeged.

The scientific activities of Dr. Smolanka Volodymyr Ivanovych are indicated by 12 manuals and 139 publications. 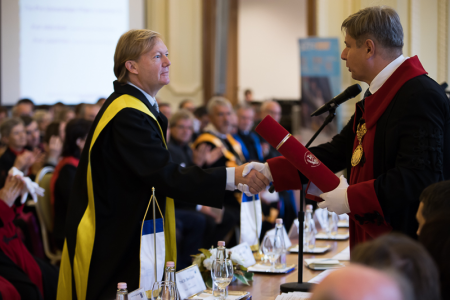 Recognition of the work of University citizens

The Pro Universitate Prize is awarded to a person who has made significant contributions to academic education and research, also has earned outstanding merits in university leadership and development. In addition, he actively participated in the development of domestic and international institutional, professional and economic relations of the University of Szeged, in the maintenance of established co-operation or in the creation of new ones.

The Senate of the University of Szeged gave the Klebelsberg Kuno Award in 2019 to Prof. Dr. Zoltán Janka, professor emeritus of the Faculty of Medicine. Those who have made significant achievements at the University or related to the University in the fields of science, education, culture, art, or made a significant contribution to the promotion and recognition of scientific results and cultural values of the University could receive this award.

In 2019 the Senate of the University of Szeged gave Researcher of the Year award in life sciences to Prof. Dr. Ferenc Fülöp, an academic professor at the Institute of Pharmaceutical Chemistry in the Faculty of Pharmacy. The award in the area of humanities and social sciences went to Prof Dr. Imre Lengyel, professor of the Hungarian Institute of Economics and Economic Development in the Faculty of Economics. In the field of physical sciences Prof Dr. Vilmos Totik, professor of the Department of Set Theory and Mathematical Logic at the Faculty of Science and Informatics has been awarded with a certificate of recognition.

The Excellent PhD Supervisor Award can be handed over to a lecturer in public servant status at the University of Szeged who has achieved outstanding results in the supervising of PhD students for many years and has been an effective supervisor. It can be awarded with not more than three times per year in the areas of physical sciences and Mathematics, life sciences as well as humanities and social sciences. Excellent PhD Supervisor Award in humanities and social sciences was awarded to Dr. Bettina Dr. Fűzné Pikó, university teacher of the of the Department of Behavioral Sciences, Faculty of Medicine. The Award in physical sciences was donated to Dr. Tibor Gyimóthy, university teacher of the Department of Software Engineering, Faculty of Science and Informatics. Prof. Dr. Ágnes Végh, university teacher of the Department of Pharmacology and Pharmacotherapy received the award in life sciences. 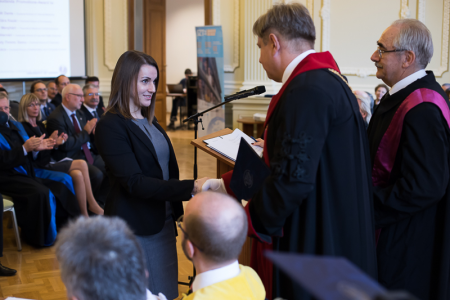 To mark the 150th anniversary of the birth of János Csengery, former Dean of the Faculty of Humanities and late Rector of the University of Szeged, the Doctoral School of Educational Sciences established created the János Csengery Medal as a recognition to the researchers’ efforts made to promote educational sciences and teacher training. The Medal was awarded to Dr. habil. János Géczi, university teacher of the Doctoral School of Educational Sciences.

Opening the gates at the University of Szeged