A three-day long international communication conference titled Communicative Space – Political Space, was held in Szeged between the 30th of May and the 1st of June. The Szent-Györgyi Albert Agóra welcomed approximately 200 guests from all over the world.

The 11th Central and Eastern European Communication and Media Conference (CEECOM) was co-organised by the Department of Communication and Media Studies, and the Department of Political Science of the University of Szeged. Presenters came from almost all the states of Europe, and also for instance from Brazil, the United States, the United Arab Emirates, India, and Mexico. They gave almost 140 presentations in 34 panels talking about the latest results of their research.

The main topics of the conference were the online/digital, physical space, the political or communicative spaces as a mediatized space, as well as the social or regulatory nature of politics and media. In these topics, between 30th of May and the 1st of June, more than 130 Hungarian and foreign communication specialists, political scientists, experienced scientists, PhD and MA students shared their latest research results in the Szent-Györgyi Albert Agóra.

The event was opened by Gábor Szabó, the rector of the University of Szeged. The plenary sessions were chaired by Péter Mezei, Vice-Dean of the Faculty of Law and Political Sciences. The first keynote presenter was Epp Lauk from the University of Jyväskylä, Finland, who talked about the transformation of journalism in the Central and Eastern European region. In her presentation she covered how and why certain patterns have emerged during the transformation of the media systems. By presenting the evolution of journalism in different countries of the region, Lauk argued that the late birth of independent journalism and the particular implementation of the western type of professionalized journalism have contributed to the appearance of varied patterns in the journalism of Central and Eastern Europe.

Connected to the title of the conference, Communicative Space – Political Space, Epp Lauk was followed by Jérôme Monnet from the University of Paris-Est Marne-la-Vallée, France. He gave a presentation about the communicative role of public spaces. In his speech he also covered the relationship between public art and the urban society. By joining the concept of public space and communicative space he analyzed the types of communicative functions that appear on our streets, in our squares, parks and other urban ornaments.

During the second day of the conference, the plenary session was chaired by Professor Péter Paczolay, a judge of the European Court of Human Rights. In this plenary session the social transformation of the last few decades in the CEE region was covered. Sabina Mihelj, the professor of the University of Loughborough, United Kingdom, talked about the transformation of publicness in the CEE media from 1989. One of the leading professors of media and cultural analysis, Mihelj drew attention to the decline of publicness. Her presentation provided an opportunity to dive deeper into the reasons of the illiberal transformation of the media systems in the region. However, Mihelj thought that this is not a unique, regional phenomenon but more likely a global tendency where the thin line between promotional culture and political communication has been blurred. 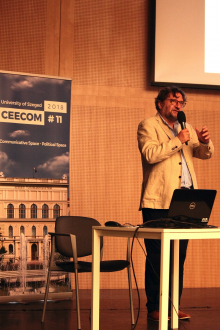 The fourth keynote speaker of the conference was the professor of the Central European University, András Bozóki. In his presentation Bozóki discussed the transformation of discourses during and after the regime change in Hungary by highlighting the metamorphosis of intellectuals. According to the professor, during the period of social, political and economic change, the intellectuals’ composition and role also transformed. Discussing the examined period, he argued that the metamorphosis of the intellectuals has generated two discourses in the Hungarian political communication: the elitist-sociological-economic language and the populist-moral-national rhetoric.

The program of the conference with the book of abstracts is available on the following web page.