Model UN is a simulation of the United Nations where high school and college students play the part of representatives meeting in structured committees - Security Council, UN Women, European Council, Human Rights Council. The conference was held between 29th September and 2nd October in Szeged.

The Model United Nations (MUN) conference aims to be an authentic simulation of the United Nations – complete with Security Council, General Assembly, an ECOSOC committee as well as a wide range of other sub-committees. For the duration of a MUN, every participant or ‘delegate’ represents a member state of the United Nations in one of the committees of the UN system. At SZEMUN (Szeged Model United Nations) there were committees dealing with issues such as health, politics, disarmament and the environment. The ultimate objective of every delegate is to lobby for support of other delegates and to debate and have passed a resolution on one of the topic areas within their committee. This is the role of a delegate to represent the views of their country. Those resolutions which passed in committees are then further discussed in the General Assembly.

“The MUN experience is much more than just a conference. On one hand research and preparation required beforehand. On the other hand it involves adoption of views and attitudes other than their own; working with new people or friends to represent a nation; mock debates that create such a buzz down in house area for in the lead up to a conference. Last but not least the social aspect of the conference: delegates wind down after a hard day of committee work, have the opportunity mingle in the diverse MUN crowd, making new friendships”- said Alisa Kujundzic.


The work of the SzeMUN’s Human Rights Council

“SzeMUN wasn’t just work, but a possibility to know new, other, special people, with whom we could make last-long friendships. Our Official Night was the most memorable. We had the opportunity to meet the rector, dr. Gábor Szabó and the vice-rector, dr. Katalin Nagy of the University of Szeged, and Krisztina Morvai, who is now one of the members of the European Parliament. Certainly we could chit-chat free-wheel with our chairs and delegate-partners”- said Réka Szaniszló. She added: Generally in the Human Rights Council the topics are debated both legally and morally as well. Two themes what our recieved for debate on during the conference were – without a doubt – legally and morally controversial. These two issues were: abortion and euthanasia, but we could debate on just one of the topics. This issue was abortion.

She highlighted: we had 2 crucial points on which they debated the most: until when abortion on request should be allowed, and the father’s rights. According to the european countries’ and Izrael’s regulation on request abortion is allowed until the twelfth week of pregnancy, but in India this date is the twentieth week. Of course there is a possibility to abort after the twelfth week in the european countries, but if there is a crucial medical indication. The european countries and Izrael objected the twentieth week limit because until this date the fetus become a baby. The second crucial point was the father’s rights. Slovakia and the Czech Republic would like to give a legal status to the father in the decision on abortion. However, all the other countries were against. They wouldn’t recognize that the father has the same rights as the mother. However, the in favour countries’ opinion was that the father is a parent as well, so we have to insure some rights in the decision process. We also tried to find solutions, and mentioned the demographic effects of abortion during the debate, but these topics weren’t our main points.

How did they finalize their resolution at the end of the conference?

The participants made 12 operative clauses. The operative clauses contained their recommendations about: standardizing the abortion time limit; extension of abortion period in special cases such as rape, incest and fetus malformations; the registered use of therapies such as medication abortion and aspirational abortion; ban of home abortion; crime of proceeding illegal abortion and illegal abortion drug smuggling; the government’s role in providing legal protection to women who undergo the procedure; the government’s role in introducing appropriate health policies; the importance of father’s opinion in normal cases; the importance of sex education; the policies remaining neutral and unbiased.


In SzeMUN’s Human Rights Council the following countries had a delegate: Afghanistan, the Czech Republic, Finland, France, Greece, India, Izrael, Italy, Portugal, Slovakia and Sweden. Due to Afghanistan has never been presented we had to harmonize – regarding abortion – liberal countries’ views. 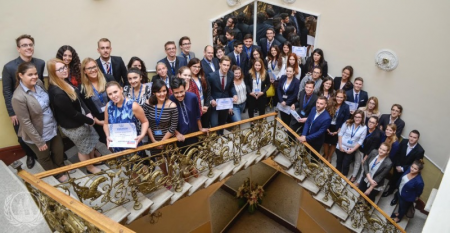 The University of Szeged is a well-known and internationally ranked institution in Hungary and worldwide. It is such a wonderful experience to study here. Instructors are professionals and well-qualified; students are nice and open towards foreign cultures. Events organised by the faculties are pleasant and help with integration as well as provide the opportunity to get new acquaintances and friends.