The University of Szeged received two awards at the Budapest conference that was organized on 14th of January 2015 as the closing event of the Campus Hungary project of the Tempus Public Foundation on the internationalization of higher education in Hungary. Staff members of the Faculty of Dentistry, University of Szeged and the Klebelsberg Library of the University of Szeged competed and won with good practices in liaising with foreign students, which can also be useful for others.

Foreign Students’ Support Service at the Faculty of Dentistry, University of Szeged

The foreign students studying here call Ágnes Zádori-Nagy almost every day: either a locksmith is needed for a broken lock late at night, or she is turned to because someone is about to break down at the end of the exam season and they are in need of some friendly words.

“It is important to emphasize that this service does not address academic matters. This task is performed by the Education Centre for International Students at the University of Szeged. We help them in everyday life, in managing their matters, etc. Most of the newcomers face a culture shock: they get into a completely different country, a new environment where the customs are different and communication difficulties may arise in a variety of situations,” explained Ágnes Zádori-Nagy.

The Self-Organization of Students and Conversation with the Dean

“The service now bearing the name ‘Foreign Students’ Support System’ was created by the needs of students,” emphasized the assistant. Some of the foreign students were motivated to set up a student council representing foreign students. The student council has not yet been established, but the Dental International Students in Szeged group has been formed. They meet every two weeks, and want to institutionalize the group.”

The Semester Overview, which has been established and functioning at the Faculty of Dentistry, University of Szeged for years, was also included in the application submitted by the Faculty of Dentistry, University of Szeged: 2-3 students for each grade attend a conversation with the dean, where students may give their observations, requests, and experience. They are summarized in the Dean’s Office, and the necessary changes are made.

The staff members of the Dean’s Office of the Faculty of Dentistry, University of Szeged presented these good practices in their application and in a presentation during the awards ceremony in Budapest on Wednesday. They received the second prize in the category of services provided to students.

Our University Library for Internationalization 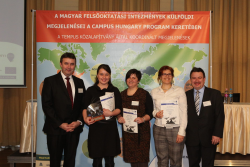 The runner-up of the International Higher Education Marketing category of the competition called “For the International Development of Higher Education 2014” is the Klebelsberg Library of the University of Szeged. Three staff members of the university library - Erika Csengődi, Edit Sümeginé Lehotai and Eszter Szabó Gilinger - also participated in the intercultural sensitization training of the Tempus Public Foundation.

“It is no secret that the training prompted us to think about what and how we do things for the sake of internationalization, and how and with what we serve the foreign students and teachers,” said Eszter Szabó Gilinger, librarian and Communications Specialist. “We considered the things that can be regarded as good practice at our workplace. We pulled together and fitted everything that is available in the library and complemented and completed it when it was necessary. This led to a strategy, which also summarized what else should be done in the international arena and what deficiencies should be eliminated.”

The PR group of the library already began to redesign its strategy during the training to offer attractively high quality library services for foreign students as well. The knowledge gained in the training was put into practice; some of the ideas collected there were adopted and implemented.

Conference for Students from Other Countries

During the conference held in Budapest, the participants were given an overview of the results of the Campus Hungary program supporting institutional development in addition to the introduction of the service and quality development for the internationalization of national higher education.

The competitiveness of Hungarian higher education, the different higher education databases, and the research related to them, the international strategies of universities among other things were discussed at the conference. The speakers stressed that in the international arena, the strengths and individual features of institutions had to be emphasized, while at home, we must strive to ensure that students from other countries learning in Hungary were involved in the processes.

The methodology book entitled “Internationalization of Higher Education in Hungary” was presented in the conference, which was published for international leaders and coordinators of higher education institutions. At the closure of the program, the participants could listen to a roundtable discussion with the representatives of the institutions involved in the audit.

I love everything in Szeged: every corner of every street, I will always keep them in my heart. I take photos of the city when walking around and I am planning to launch a blog to promote this beautiful corner of Hungary among international students. People of Szeged are caring, always smiling and we are living peacefully together. I have never felt isolated or neglected. As a coffee lover, i always enjoy having my favorite type of coffee in different coffees in Szeged. Lookin for calmness and nature vibes, I would certainly walk by the Tisza river whenever I want.

I came from a city where young women have recently successfully fought against the mentality that had not allowed them to go to study abroad.5 years ago families were extremely protective over their daughters, but nowadays it has been changed into a new perception which allows girls to have the freedom to choose their way of life: career and personal development.