Angela Merkel received the honourable title of Doctor Honoris Causa from the delegation of the University of Szeged (SZTE) at the Andrássy University of Budapest. Afterwards, the German Federal Chancellor talked to university students.

Among the representatives and 120 students of six Hungarian higher educational institutions – the University of Szeged, the Andrássy University of Budapest, the Eötvös Lóránd University, the Semmelweis University, the Corvinus University and the Central European University - Angela Merkel, the German Federal Chancellor received the honourable title of Doctor Honoris Causa. At this ceremony Zoltán Balog, Minister of Human Resources and László Palkovics Minister of State for Higher Education were also present.

The emblem of the three Faculties on the ceremonial gown

The rector of the Andrássy University of Budapest that was hosting the Honorary Doctoral Awarding Ceremony, András Masát who began his career in Szeged introduced the the German language higher educational institution. He emphasized that they have developed from a young university into a European higher education institution, as the result of the German support and the German-Hungarian connections.

The Honorary Doctoral gown of Angela Merkel is decorated with the emblem of the three faculties of the University of Szeged that initiated the awarding of the honourable title. The golden color resembles the Faculty of Law and Political Sciences which being a renowned representative of political sciences has a high opinion of the political achievements of the German Federal Chancellor. The color green which is the symbol of the Faculty of Science and Informatics expresses that the scientists of physics pay tribute to Angela Merkel who began her career as a researcher physicist. The royal blue color of the Faculty of Arts represents that the faculty is the home of German Studies and it appeciates the efforts accomplished by the German Federal Chancellor in favour of the German language and for the maintaining of German Hungarian contacts. The ceremonial gown of Angela Merkel, who was awarded as Honorary Doctor, was presented by Krisztina Karsai Vice-Rector for Education of the University of Szeged.

Laudation in the name of the SZTE

The new honorary doctor was greeted in German language by Gábor Szabó, Rector of the University of Szeged and member of the Hungarian Academy of Sciences. He expressed his joy, that this ceremony could take place, because it reinforces the connections between the two countries and their universities. The Rector introduced the University of Szeged as one of the most well known higher educational institutions in Hungary and a university that achieved outstanding results in the world ranking lists. He found it important to talk about the laser center that is being built in Szeged, because it can give further momentum to reseach work. He emphasized that the SZTE considers its mission to pay particular attention to sustainable development. He mentioned that the former German Minister for the Environment, Angela Merkel would also find it remarkable that the SZTE was ranked 19th in the world and 11th in the European ranking list of green universities. He remarked that Angela Merkel is one of the most influential and recognized politicians whose actions in environmental protection are outstanding and she has accomplished a lot for education, especially for higher education and for the priority of scientific researches. Afterwards Gábor Szabó the Rector of the University of Szeged read the resolution of February 2013 of the Senate of the University of Szeged and reviewed the most important steps of the career of the German Federal Chancellor in German language.

Angela Merkel earned her degree as a physicist at the University of Leipzig and she had been working as a scientist until 1990 and published in internationally renowned scientific journals. She defended her doctoral dissertation with a magna cum laude qualification in 1986 in the field of natural sciences. It expresses the “citation index” of her political achievement that the greatest search portal returns 73 million hits for Angela Merkel’s name. Her political career starting in 1989 can be associated with a very important date for us Hungarians, because the change of the regime in that year allowed the still ongoing development. Angela Merkel deals with today’s problems with a great sensitivity – emphasized Gábor Szabó who invited the German Federal Chancellor to Szeged and pointed out that the honorary doctors share their knowledge with the citizens of the SZTE according to the university statutes and regulations. The universitas of Szeged wished successful work for the German Chancellor with the following watchword of the University of Szeged: “Veritas, Virtus, Libertas.”

The Honorary Doctor of SZTE gave a lecture

Angela Merkel as the honorary doctor of the University of Szeged gave her lecture in her honorary doctoral ceremonial gown. Refering to the memory of Albert Szent-Györgyi, István Bibó and Attila József, she made it clear how much Europe ows to Hungary and the University of Szeged. The historical parallels of 1848 and Sándor Petőfi, 1956 and the Petőfi-society conveyed the message for Angela Merkel that Hungarians fought a lot for their freedom. She emphasized that 25 years ago Hungarians were among the first who bore witness to their desire for freedom with the peaceful transition and their guiding decisions. They opened the borders that later led to the German unity. In her talk Angela Merkel delt with actual political issues as well. She spoke about the sanctions against Russia, the situation in Ukraine, about the danger of terror and antisemitism.

Today’s youth are the decisionmakers of future 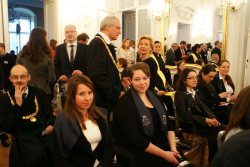 Then she turned to the university students as to the decision makers of future, she took off her ceremonial gown, and the German Chancellor was expecting the questions of the young people with interest. “When did you decide to enter into politics?” –this was the first question. “Such a quick political career is only possible in revolutionary times” – she replied and refered with this to her posts as Minister for the Youth and Minister for the Environment and to her party positions. The German Federal Councellor emphasized that “without the peaceful revolution I would not have been a politician”. “What advice would the most influential woman of the world give to those women who would like to enter into politics?” thus sounded another question. “The first necessary step apart from the theoretical knowledge is to gain political practice. Women are human beings just like men, they need to believe in themselves and they must not be overwhelmed by failures.”

There were questions about the energy policy, the Southern stream, the chances of national politics within the European Union and about the common currency. The young people were as interested in her reading experience as how she dealt with stress. For this last question she replied: “It is important to find joy in your duties. The remedy of fatigue is to get enough sleep. When I want to relax I cook or listen to classical music.”

At the end of the informal style discussion Angela Merkel emphasized: she sends her greetings to the students of the University of Szeged and will not forget about the invitation, although she does not yet know the exact date of her visit. Angela Merkel left the Andrássy University accompanied by the clap of the people present to take part on her next Hungarian program.

Photos taken at the event can be seen here:

Further photos of the ceremony can be seen at:

Being awarded the Stipendium Hungaricum scholarship, I came from Lebanon to Szeged. Student life here is astonishing; I simply adore being a student at SZTE. A variety of foreign scholars, and young people have arrived here from all corners of the world. After having finished with academic work at the lab, there is still time for relaxing. The town itself is also impressive – my favourite place is Széchenyi tér.

I love everything in Szeged: every corner of every street, I will always keep them in my heart. I take photos of the city when walking around and I am planning to launch a blog to promote this beautiful corner of Hungary among international students. People of Szeged are caring, always smiling and we are living peacefully together. I have never felt isolated or neglected. As a coffee lover, i always enjoy having my favorite type of coffee in different coffees in Szeged. Lookin for calmness and nature vibes, I would certainly walk by the Tisza river whenever I want.