Albert Szent-Györgyi was Awarded the Nobel Prize 80 Years ago

Szeged and its university celebrated the 80th anniversary of Albert Szent-Györgyi’s Nobel Prize-awarding at the end of October. The celebration was unusual and remarkable with the presence of Marcia Szent-Györgyi, wife of the researcher and former rector of the University of Szeged.

85 years ago on 18th March 1932, Albert Szent-Györgyi declared that hexuronic acid and vitamin C are the same substances. The discovery of the professor of the University of Szeged was published in Nature journal on 15th April 1932. Later he revealed that paprika (Capsicum annuum) was a rich source of vitamin C in the autumn of 1932 and successfully produced it in a large quantity, as a result, the structure of the remedial substance healing scorbute and other diseases became identified.

Albert Szent-Györgyi found out on 28th October 1937 that he would be awarded the Nobel Prize by the Faculty of Medicine at the Royal Karolinska Institute in Stockholm, for his discoveries related to biological combustion processes, with special reference to vitamin C and the catalysis of fumaric acid. The cheering was recorded in the minutes of the Faculty of Medicine’s session at SZTE, which was, 80 years later, introduced to the widow of the researcher.

The illustrious anniversary of the scientific triumph, the 21st and 22nd of September, 2017 also became the ’Day of Surprise’ since Marcia Szent-Györgyi visited Szeged as the guest of Goodwill Pharma Kft., a company dealing with vitamin C and bearing the name of her husband. 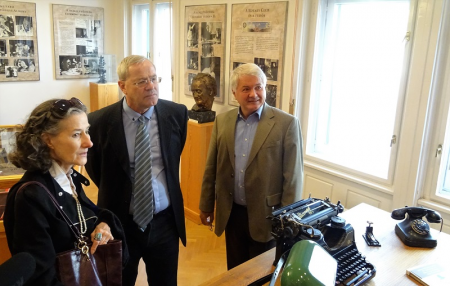 The current dean of the Faculty of Medicine (the successor of Szegedi Orvostudományi Egyetem), Professor Ferenc Bari revealed the 80-year-old minutes to Marcia Szent-Györgyi: the session was held on the 29th of October in 1937 and it was chaired by prof. István Rusznyák. The former dean declared that Albert Szent-Györgyi was awarded an undivided Nobel Prize; to preserve the noteworthy event, prof. István Rusznyák took the initiative to have it recorded in the minutes and to fabricate a commemorative plaque and token – ’not only to express our happiness, gratitude and fidelity, but also to remember in the future.’ According to the minutes, Albert Szent-Györgyi replied that he was very happy and touched, but not proud, because he was led by two major forces during his research: the beneficial conditions for scientific work and the friendly love surrounding, protecting and strengthening him, which created a calm atmosphere to conduct his academic research. Thus, the appreciation is addressed to the university that supported him and a circle of friends enabling his work, as well as to the ideal community whose intention was to ‘get to know the great unknown’ in order to jointly serve the homeland and the peaceful culture.

’He always protested against war. He even wrote many articles on peace in the American journals and published a book entitled ’The Crazy Ape, which was the most significant work on science and survival.’ remembered his widow.

Messages of a researcher husband

Marcia and Albert Szent-Györgyi got married in 1975 and they had been living together until his death on the 22nd of October 1986. ’It is slightly painful to remember the past but I would like to keep every detail in my mind, because I loved my husband so much. I feel lucky and grateful for Albert Szent-Györgyi’ – said Marcia Szent-Györgyi in her speech delivered in the Academic Committee of Szeged. She has already emphasized that she was a painter, she did not like to talk and avoided publicity – as a result, it was exceptional that she even delivered a speech on ’the Prof’.

’The Professor adored science, he lived exclusively for serving it. He deliberately shot himself on the arm to leave the battlefield of the First World War behind and to dedicate his life to sciences and peace.’ She added that Albert Szent-Györgyi was fighting for peace with even economic means and he also took part in the peace process ending the Second World War to create the best possible position for Hungary. ’He was always on the go and enjoyed a good reputation in every corner of the world; he worked in Cambridge in England, in the Netherlands and also in the United States before settling down in Massachusetts’ – said Marcia Szent-Györgyi. ’His passion and knowledge arose from his childhood spent in Hungary. He dedicated his academic life and research to study the possible cures of cancer and hereditary diseases. He always wanted to make our lives better.’

The most important message of all was that ’knowledge has to be shared and the development of sciences is based on cooperation’.

Legacy of the researcher

’I am convinced that many people mind to preserve his heritage’ said Marcia Szent-Györgyi, adding that she had already given documents and personal memories to Hungarian institutions wearing his husband’s name. She also kept the letter written by former American president J. F. Kennedy replying to Albert Szent-Györgyi about the Vietnam War.

Relics of the researcher – such as the suit tailored in Szeged that he wore during the Nobel Prize ceremony – will be displayed at the exhibition jointly organized by Szent-Györgyi Rotary Club and the University of Szeged. After commemorating the University Day on the 11th of November, the Szent-Györgyi Memorial Exhibition is open until the 10th of December in the Atrium of the Rector’s Office.

Source: SZTE info, based on the Hungarian article written by Ilona Újszászi