The technical handover of the University of Szeged’s new Biobank building has been concluded, along with the process of putting the various storage units, service technologies, building surveillance and process control systems in operation. The facility will be prepared to receive the first samples in a matter of a few months.

"The modern, semi-automatic storage system was donated by the Spartacus Cancer Foundation, which was founded for the support of Hungarian cancer research in 2019. To operate the storage system, a new host building had to be constructed. Following the construction of the storage unit, its system programming has now been completed. Based on the current system data the storage can host up to 1,800,000 samples. The storage capacity however is flexible, according to the number of storage tubes. By changing the storage system and the software, 3,000,000 further samples can be housed in the biobank – which is a long-term goal. The primary samples arrive form the units of the Albert Szent-Györgyi Medical School, but we will expect samples from national and international cooperations as well." – Said Dr Zoltán Veréb, head of University of Szeged's Regenerative Medicine and Cellular Pharmacology Laboratory, head technical manager for setting up the biobank.

John Les Corps began his career with laboratory robotics and has been working with LiCONiC UK since 2008. Lichtenstein-based LiCONiC Company was the first in the world to manufacture -80 semi-or fully automatic storage units. LiCONiC UK has been working under the umbrella of LiCONiC for the past 15 years, and they were the first company to setup such a storage system in the UK Biobank. Soon after they added 6 more similar units along with 8 -20 storage systems. From then on, it snowballed. Thanks to the new technology, in the past years the storage systems reached -145 degrees, which gives great perspectives for the future developments.

"Such and similar systems exist in Australia, China and India. As a UK-based company, it was a novelty for us to ship and set up a relatively huge system in Hungary – this has not been done before. The most positive feedback is to see the system up and running properly – we are very proud of it." – Mentioned John Les Corps, who also claimed that the accomplished work in the Szeged Biobank served a basis of new experience for multiple reasons. 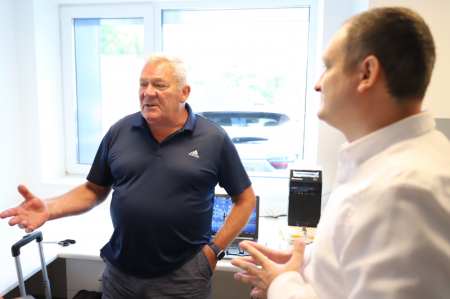 As it turned out the process was put to a halt by the Covid-19 pandemic, as the first wave broke out right after the system arrived to Szeged.

"One of the greatest experience for us was the Szeged team’s enthusiasm and devotion towards the project. In most cases, Biobanks are not given much credit, but our colleagues in Szeged have strived for efficient implementation from the very beginning, which has been exemplary and positive for us compared to teams running Biobanks in other countries. When we first came here, we were greeted by an abandoned hangar building, but the local team already had a clear picture in their heads about the outcome. The transformation is impressive and the result is one of the best Biobanks I have ever seen. The laboratories and the infrastructure set up are most ideal." – Said John Les Corps.

It is highlighted that work in a biobank comes with quite many responsibilities, as the bank will store millions of samples. The samples are essentially worthless, but they are irreplaceable and therefore priceless. Similar to regular banks, a biobank is responsible for the safety, mobility and transparency of the stored samples. Yet all this comes to real value when the sample is retrieved and used.

John Les Corps and his colleague Tony Kelly instructed the Szeged team about the installation, setup, calibration, usage and operation of the storage system. Tony Kelly has been involved in robotics all around Europe and started his work with LiCONiC UK 14 years ago, almost immediately getting involved in several projects.

"We’ve set up multiple systems all around Europe, but this project in Hungary is quite unique. This storage system has been used before and now shipped over here to Hungary. One of the biggest challenges was that we had to program new software on an old system, but fortunately we managed to overcome this obstacle. Automated biobanking is a nowelty in Hungary, yet it has been quite popular in last 10 years in other European countries – especially in the UK. We are certain that the Szeged Biobank will reach similar successes in the near future." - Said Kelly.